Blast from the Past

When Jennifer Anderson approached me about writing an article for "Blast from the Past," a new section of the ODTUG EPM Newsletter, I thought to myself, “Wow, this is awesome.” I immediately grabbed my notepad and started brainstorming, trying to come up with some really cool and interesting topics, then "SQUIRREL." 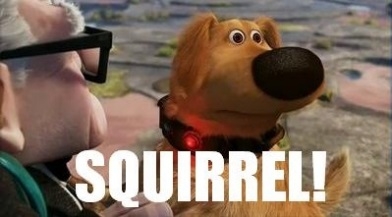 Yes folks, that really happened. I was taken down memory lane and was brought back to my childhood. Considering the topic, I think it is perfectly normal that I was distracted. Slowly bringing myself back to the task at hand, I thought of a product that many of us can relate to: Ovaltine.

When I think of a blast-from-the past-related-product, I can think of many. Well, those who know me know that I often think of food and nutrition.

Which product comes to your mind? Could it be? 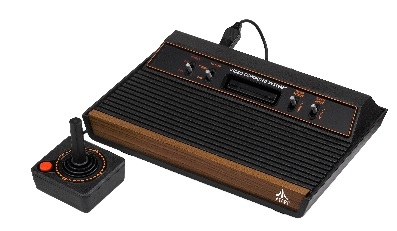 As much as I love to talk about food and nutrition, that is not what this article is about. Today, I bring you down Hyperion memory lane.

For instance, applications software: Unless you have worked with the program since inception, what you have in front of you is as good as new. There are several blog posts and articles on the web that offer a timeline on the history of Hyperion. There is limited information on IMRS Micro Control and even Hyperion Enterprise.

Hyperion entered the world as IMRS Micro Control. When IMRS released the DOS version of Micro Control in 1983, I was just learning how to walk. Up to that time, financial data was delivered by a method called time sharing; this involved the use of a large mainframe server to provide the data. Retrieving the data was not a simple extraction from an application or running a report; it required a lot of manpower and the involvement of a company’s IT or IS department. Robert Thomson, founder of IMRS, saw an opportunity. Thomson realized that if he could develop software that will operate on a single computer instead of a mainframe that companies will pay to have access to this technology. Micro Control operated on local area networks rather than a mainframe.

In September 1983, Federal-Mogul Corporation, a multinational manufacturing firm of ball bearings and other parts used in the trucking, construction, and aerospace industries with plants in 10 foreign countries and 20 warehouses overseas, decided it was time to cut costs. The international finance department incurred excessive charges related to the time-sharing setup for receiving and transmitting financial data. The department set up two trial sites: one in Africa and the other in Puerto Rico. In each location, employees entered financial data onto their personal computers just purchased from IBM (do you hear the choir in the background as well?) and then used Micro Control to convert the figures from local currencies to US dollars. After cross-checking their work and transmitting their data, over a period of time the companies line charges dropped from about $2,300 to $600.

This was a big deal for both Federal-Mogul Corporation and IMRS. 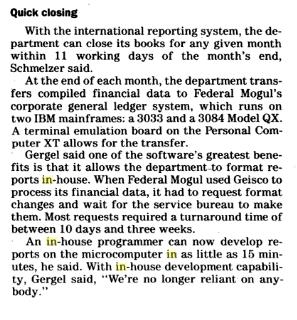 In 1987, IMRS decided they will soon launch their first Windows-based product. The actual launch did not occur until 1989. In 1987, IMRS also introduced Retrieve-MC, which gave Lotus 1-2-3 users the capability to import and export data between 1-2-3 and Micro Control. Now I can relate; this is starting to sound a little familiar to me. However, in performing an extraction from Micro Control, only four descriptors were required; Name, Account, Period, and Category. I will assume this is the Scenario dimension, am I right?

Having the ability to upload the data from 1-2-3 into Micro Control was supposed to aid in consolidations, a very important feature for the corporate accounting department. I’m imagining each general ledger was merged onto a 1-2-3 file and imported given the limitations of the software at the time. Maybe Micro Control did allow multiple file loads. Stay tuned.

Fun fact: In 1995, IMRS changes its name to Hyperion Software Corporation. James Perakis, the president, called the IMRS name a “handicap” and decided to look through the dictionary for words that began with hyper; this is where he found the name Hyperion. Perakis thought the name would be memorable and stick with people.

In 2000, Hyperion releases Financial Management (HFM). In my opinion, it is one of the best consolidation tools out there yet. HFM offers smart dimensionality, powerful and easy-to-use reporting and analysis tools, complete audit trails, drill-through capabilities, user-friendly interface, and so much more.

From 2000 to 2004 Hyperion released several different versions offering many enhancements. In 2007, Oracle acquired Hyperion and later on decided to bundle Oracle and Hyperion BI tools. Over the years, Oracle has released several different versions of the EPM Suite that includes Hyperion Financial Management. The timeline provided below goes through some of the enhancements added in each release.

In July 2015, Oracle releases HFM 11.1.2.4, the first version of HFM that can run on a non-Windows operating system. With more and more enterprises moving away from just Windows environments to an open-sourced Linux environment, this was a smart move by Oracle. 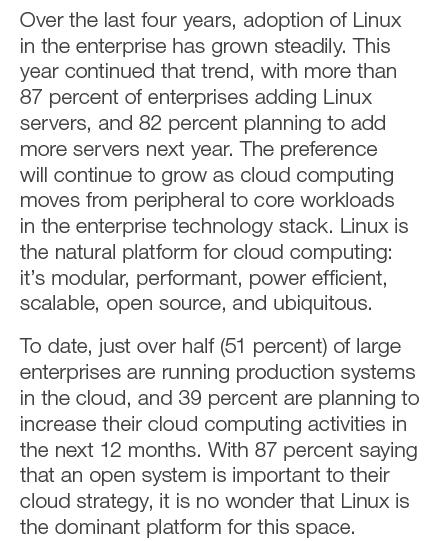 “As we continue to build on our past to create what we have now along with the increasing speed and change in technology, only time will tell what the next 30 years will have in store for us.” –Michael Darouie, Senior Consultant at CheckPoint Consulting

Do you have a “Blast from the Past” story that you would like to share? Project- or software-related? What about Kscope? I would love to share your story in future articles.

I would like to give a special shout-out to Ron Dimon for helping me come up with some topics and other ideas for this article.

How’s that for old-school? 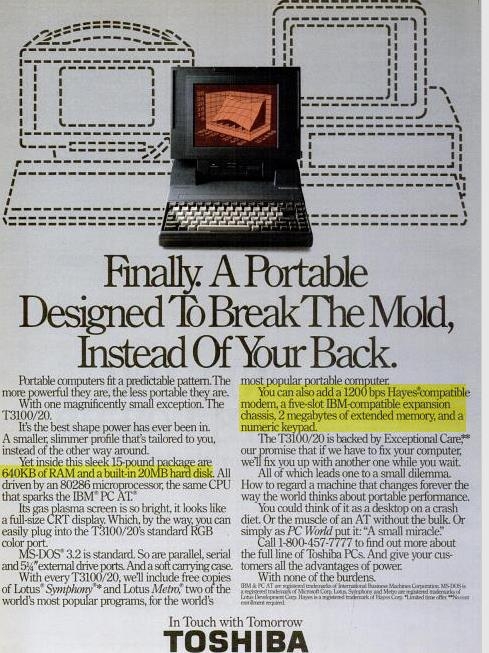 What’s the next big idea? Share yours with the world's largest gathering of Oracle technologists and business leaders during Oracl...
Announcing the 2022 ODTUG Board of Directors

Announcing the 2022 ODTUG Board of Directors
Congratulations to the member-elected directors:
Jim Czuprynski
Jackie McIlroy
And to the board appointed director:
Roel Hartman
ODTUG Kscope21 Virtual Event Presentations and Recordings Now Available to Full Members

The ODTUG Kscope21 Virtual Event presentations and recordings have been released to ODTUG full members. If you weren't able to attend the conference, now is your chance to catch up on all the amazing ...